Alcorn State University was founded on the site originally occupied by Oakland College, a school for whites established by the Presbyterian Church.

Hiram R. Revels resigned his seat in the United States Senate to become Alcorn’s first president. The state legislature provided $50,000 in cash for ten successive years for the establishment and overall operations of the college. The state also granted Alcorn three-fifths of the proceeds earned from the sale of thirty thousand acres of land scrip for agricultural colleges. The land was sold for $188,928 with Alcorn receiving a share of $113,400. This money was to be used solely for the agricultural and mechanical components of the college. From its beginning, Alcorn State University was a land-grant college.

In 1878, the name Alcorn University was changed to Alcorn Agricultural and Mechanical College. The university’s original 225 acres of land has grown to become a 1,700 acre campus. The goals for the college set by the Mississippi legislature clearly emphasized training rather than education. The school, like other black schools during these years, was less a college than a trade school.

At first the school was exclusively for black males but in 1895 women were admitted. Today, women outnumber men at the university eighteen hundred to twelve hundred.

In 1974 Alcorn Agricultural and Mechanical College became Alcorn State University. Governor William L. Waller signed House Bill 298 granting university status to Alcorn and the other state supported colleges. In truth, this law created a change of name rather than of purpose. Alcorn had already become a more diversified university. It provides an undergraduate education that enables students to continue their work in graduate and professional schools, engage in teaching, and enter other professions. It also provides graduate education to equip students for further training in specialized fields while they contribute to the advancement of knowledge through scholarly research and inquiry.

Alcorn began with eight faculty members in 1871. Today there are more than five hundred members of the faculty and staff. The student body has grown from 179 mostly local male students to more than 3,000 students from all over the world.

While early graduates of Alcorn had limited horizons, more recent alumni are successful doctors, lawyers, dentists, teachers, principals, administrators, managers, and entrepreneurs. Alcorn has had fifteen presidents with Dr. Clinton Bristow, Jr. becoming the sixteenth president in 1995. In January of 2008, Dr. George E. Ross became the seventeeth president of Alcorn.  Of these, Dr. Walter Washington, who assumed the presidency in 1969, was the longest-tenured president in Alcorn’s history.

Over the decades the college that once was a struggling institution has become one of the leading black universities in the nation. Alcorn State is now fully accredited with seven schools and degree programs in more than fifty areas including a nursing program. The facilities have increased from three historic buildings to approximately 80 modern structures with an approximate value of $71 million.

Alcorn will continue to serve the generations to come. Its distinct heritage will never be lost. Throughout the university’s history, Alcorn has followed a carefully structured plan to retain and enhance the image and potential of students and to attract young people whose intent is to receive a quality education. Alcorn has served the state of Mississippi, the nation, and the world for over one hundred and twenty-five years. 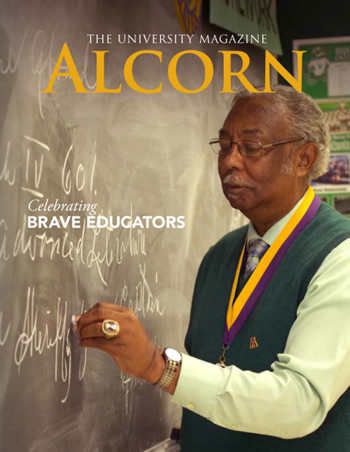